Investors wondering about ways to re-risk portfolios after the COVID-19 pandemic should consider increasing allocations to U.S. small-cap value stocks. Following years of underperformance and a collapse in valuations in March, these equities appear poised for a long-awaited, sustained rebound.

Proponents of value investing have been predicting a great rotation from growth to value stocks for years. So, why should investors believe it now?

Because this is not my personal opinion, but rather a conclusion drawn from a thorough analysis of prior disruptions dating back to 1937 in which the spread between dividend yields on small-cap value (as measured by the Russell 2000 Value Index) and large-cap stocks (as measured by the S&P 500 Index) widened significantly.

Small-Cap Value: A Look Back

In each prior case, small-cap value subsequently outperformed large caps, often for several years and by a wide margin. In mid-March, the spread between the Russell 2000 Value Index and the S&P 500 Index was the widest it had been since the 2008 Global Financial Crisis (GFC). Historically, this has suggested an attractive entry point into small-cap value.

In “normal” times, small- and large-cap stocks tend to perform similarly, with a relatively high correlation (0.8 on average) between the Russell 2000 and the S&P 500 indices. However, at critical moments in market history, those indexes have diverged, with the underperformance of small caps creating a significant gap between them. Often during selloffs, small-cap value stocks are hit hardest, creating an even wider dividend-yield spread over large caps.

The most recent such event was the GFC.

That pattern of small-cap value being hardest hit is repeating itself today.

Thanks to a large portion of Americans going into lockdown, small businesses are suffering much worse than larger firms that have more resources to endure revenue losses and adjust to the dislocation. As a result, in March 2020, the spread between the Russell 2000 Value dividend yield and the S&P 500 dividend yield soared to a new high of 1.34%.

Based on the experience of 2008 and other historic market events, spreads of this magnitude represent a powerful signal that small-cap value stocks have the ability to outperform during the coming recovery. 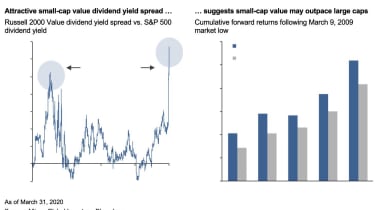 Of course, it’s always possible that things are different this time.

There are certainly important differences between the markets’ reactions to the COVID-19 pandemic and the GFC. Most notably, the 2008 equity selloff struck indiscriminately across industries. In the current crisis, the impact has been uneven. In large-cap stocks, for example, some industries such as airlines, entertainment and leisure are bearing the brunt, while industries such as technology are maintaining and even seeing higher valuations.

Given these differences, it makes sense that the subsequent recoveries could diverge as well, at least for large caps.

In small-cap value stocks, however, the COVID-19 selloff has been violent and across the board, with virtually no differentiation across sectors. In this way, the situation today mirrors that of the GFC almost perfectly. As a result, it’s reasonable to conclude that the recovery will also resemble that of the prior crisis and small-cap value could again outperform.

The opportunity in small-cap value stocks relative to large caps comes as investors have flocked to large-cap growth stocks, largely as a flight to safety in the aftermath of the COVID-19 selloff. Now, after the recent stock market rally, many market observers see large caps as having little room to appreciate. In contrast, betting against significant appreciation in small-cap value would require believing that the spread between small-cap value and other assets will not revert to historic means and small businesses will continue lagging the broader economy throughout the recovery.

There is one factor working against small-cap value: falling dividends. Dividends are a crucial component of small-cap value returns – up to 40% on average – and there is little doubt that small businesses will be forced to continue reducing or eliminating dividends. However, the same phenomenon occurred during the GFC, and it in no way disrupted the outperformance trend during the subsequent recovery.

Having said that, given how the current crisis is reshaping the economy, investors considering tilting toward small-cap value today might benefit by avoiding broad index strategies in favor of actively managed approaches that can better navigate the shifting economic sands to focus on companies with the strongest fundamentals while minimizing the drag of dividend cuts on potential returns.

Even taking lower dividends into account, the market is sending clear signals that small-cap value appears potentially poised to outperform large-cap equities. Investors who remain unconvinced by the historic data and fear a continuation of small-cap value’s extended run of underperformance should remember that Washington has made clear that the federal government will support small businesses throughout the crisis – potentially to an even greater extent than in any previous crisis.

That commitment should bolster investors’ confidence in the historic trend.

History teaches us that the time to act on these signals is now. Investors who are still doubtful about “the return of value” leave themselves at risk of missing out on the potentially significant outperformance of small-cap value during the initial stages of the coming recovery from the Covid-19 pandemic.